Who Obeys Who In Marriage? Ephesians 5 and the Role of Husbands and Wives Part 1 of 3

Husbands, love your wives, as Christ loved the church and gave himself up for her, that he might sanctify her, having cleansed her by the washing of water with the word, so that he might present the church to himself in splendor, without spot or wrinkle or any such thing, that she might be holy and without blemish. In the same way husbands should love their wives as their own bodies. He who loves his wife loves himself. For no one ever hated his own flesh, but nourishes and cherishes it, just as Christ does the church, because we are members of his body. “Therefore a man shall leave his father and mother and hold fast to his wife, and the two shall become one flesh.” This mystery is profound, and I am saying that it refers to Christ and the church. However, let each one of you love his wife as himself, and let the wife see that she respects her husband.

During my preaching and teaching career I’ve covered the Apostle Paul’s household codes several times. There are few topics that produce quite as much arguing, anger, and accusation. 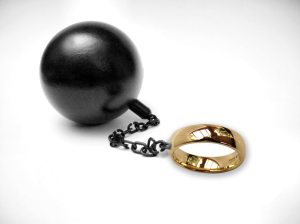 I have heard men denounce women for not submitting, women denouncing men for the suggestion of submission, I’ve encountered authors and speakers who have twisted this passage every which way imaginable to assert that the verse is advocating anything from total equality, to a slave master relationship, to a 49/51 voting split, to discussions of whether or not getting your man sandwiches during football games is a spiritual discipline. This excess of commentary on the topic can tempt me to throw up my hands and pass altogether. The problem with this is that Paul included this bit of instruction on purpose and marriage is important. If the scriptures have something to teach us on the matter, we need to learn it.

There is more than a little material to cover in Paul’s 11 verses on husbands and wives. I don’t intend to cover every interpretation, but rather in the three articles I will post on this topic, I will cover:

Approaching the Text While Wearing the Wrong Glasses

Matthew records an incident in which the mother of his disciples, James and John, approached Jesus and asked that her sons be his right and left hand men in eternity. Later, the other disciples are angered when they hear about the request, which prompts Jesus to call the 12 together and tell them that they are looking at the world all wrong.

“You know that the rulers of the Gentiles lord it over them, and their high officials exercise authority over them. It is not this way among you, but whoever wishes to become great among you shall be your servant, and whoever wishes to be first among you shall be your slave; just as the Son of Man did not come to be served, but to serve, and to give His life a ransom for many.” Simply put, the disciples jockeying for authority was a result of them looking at the world from the same perspective as the pagans around them. They are seeing the world as pagans see it. Greatness means being served. Followers of Jesus assume the status of servant. Jesus demonstrates this very graphically when he washed his disciples feet at the last supper, taking on the job of the lowest servant in the household. The message seems pretty clear: followers of Jesus are called to serve. We aren’t called to be served or to lord position over others. Believers are nowhere instructed to fight with each other over rights to subjugate each other. Our primary concern in life ought to be our focus on Jesus and commitment to grow in our faith and obedience.

Perhaps the biggest problem with how many folks approach the roles in marriage as they are discussed in Ephesians 5, is that they are approaching the text in terms of who owes who what degree of service and submission. They are wearing their pagan perspective glasses. When believers find themselves enmeshed in discussions about why “you have to” or “I don’t have to” instead of discussing what makes us more like Jesus, it’s a sign that there is something wrong. Believers ought to find themselves in a place of working to out-serve each other long before they even consider arguing about subjecting each other to our own wills.

Perhaps one of the cultural components that gets in the way of a proper perspective on the matter is the sense of entitlement that our culture has developed. We are consumers who should get proper service, not servants of the world following our master’s example. We no longer see ourselves as servants to all. The attitude has even pervaded the church, where all sorts of preachers who talk as though God himself ought to be at our beck and call, making our lives as comfortable as possible and fulfilling our wildest dreams. Churches are too often seen as existing to cater to our desires, rather than equipping us to serve Jesus.

Interestingly, discussion of whose desires get served in the marital relationship so often dominates the discussion of this passage that the vast majority of what Paul says winds up totally ignored. The passage itself spends more time discussing the relationship between Christ and the church than it does husbands and wives. Really, the key to the whole passage is verse 32, when Paul tells us that the institution of marriage, in which a husband leaves his parents to be joined to his wife as one, points to the union between Jesus and the church. As such, the passage is primarily about Jesus. The bit that we can garner regarding marital relationships is primarily in relation to the larger eternal truth of Jesus as His bride, the church. Really, if there is a unifying direction to take in relation to this passage it’s that we are to imitate Christ in EVERY aspect of our lives, including marriage.

The next post on this passage will deal with what Paul says regarding husbands.

2 thoughts on “Who Obeys Who In Marriage? Ephesians 5 and the Role of Husbands and Wives Part 1 of 3”