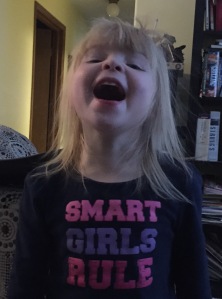 Early in my career, I worked at a facility for children with emotional disorders. We provided services for children ranging in age from 8 to 18. Many of our clients came from juvenile detention and it wasn’t unusual for them to have received little parental discipline or direction. One of the major challenges of the job was getting our adolescent clients through their everyday routine without major blowups, violence, or even having them just sit down and refuse to do anything at all. This was particularly challenging when it came to doing chores, going to school, and going to bed on time. During the first few months at the agency the training regimen is excessive, between behavior intervention techniques, therapeutic crisis intervention, and basic relational techniques. During that time I learned a grab bag of techniques for convincing kids to follow directions or to stop acting badly without resorting to physical intervention. As a parent, I’m increasingly discovering how useful these techniques are in raising and disciplining my own children. Having options when it comes to kids is great because they can be incredibly frustrating. Being able to choose an approach gives you a sense of control that can feel like it’s in short supply when you have only one or two approaches. The following are the interventions that I have found most useful in parenting: