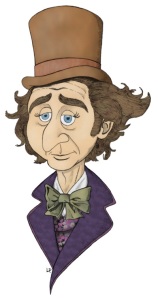 One of my favorite books and movies of all time is Charlie and the Chocolate Factory. I particularly love the way that the story depicts the children who visit the chocolate factory for the tour, with four of the five children suffering from glaring personality flaws. For example, Verruca Salt is a spoiled brat who gets everything she wants, but still wants more, or Augustus Gloop, who eats ravenously and is never satisfied. Several times while I was working as a youth pastor, I showed this film to groups of kids and asked them which of the children was probably happiest. Typically, the kids would respond that the characters who got whatever they wanted were the happiest. The reasoning seems obvious: If you always get what you want, you’ll be happy. After further discussion, most students recognize that the characters who always get whatever they want aren’t truly happy. Whenever they get what they want, their bliss passes quickly and they move on to the next want. Their happiness never lasts. For example, Verruca would decide she wanted a pony or some toy. Her father would give it to her and she would respond by asking for something else. When she got what she wanted, she would again ask for something else. All happiness that is found in possessions or circumstances is temporary. It must then be followed up with some new possession or experience in order to sustain the happiness. Verruca is a bit of a caricature, but demonstrates the concept well. In addition, we see real life examples of this every Christmas, when the internet has been replete with examples of teenagers complaining to Twitter and Facebook about how terrible their parents are for giving them the wrong color of iPod or that they received gifts instead of cash. Another common example is found in folks that run up huge debts buying new cars, clothes, and toys that they will never be able to pay for. They keep doing it because they need more stuff to be ok in life, as the happiness passes from their original purchase.

Attempting to sustain our happiness through temporary means produces the same result in our soul. We scratch the itch over and over again, only to find that the practice changes us. It leaves us emptier than we were when we started. The reason that this pathway to happiness can never work is because it is an attempt to fill an emptiness in the soul. Philosopher Blaise Pascal describes it as a void that God had intended to  occupy. Everyone has it. The problem is that only God can properly fill it. We can mask the emptiness with possessions, experiences, or alcohol, but in the end, it always comes back. Paul wrote in his letter to the Philippians that he had learned the secret to living in any circumstance, whether he was poor or rich, hungry or well fed. It’s worth noting that he wrote this while sitting in a maximum security prison facing the possibility and being executed for preaching about Jesus. He still was able to point to a contentment that was not based on his experience. That contentment was found in his relationship with Jesus and the hope he had for eternity with Christ. Paul relied on God for all of his needs. He recognized physical discomfort as a temporary condition that would pale in comparison to heaven. When he was hungry or in pain, he looked to God for context and relief. Ultimately, this resulted in Paul becoming the sort of person that could be content and joyful no matter what befell him. This lasting joy stands in stark contrast to the temporary satisfaction we feel when we get a new toy, eat a delicious meal, or go on a stellar vacation. Even more impressive is that this lasting joy is free and available to anyone who would simply choose to engage in relationship with Christ.