Through my work as a chaplain and as an addiction counselor, I’ve learned a great deal about and from Alcoholics Anonymous. It’s often said that AA is simple: Go to meetings, find a sponsor, and work the 12 Steps. The challenge that many folks face when they start going to AA meetings is that they don’t want to get a sponsor or work the steps. Alcoholics often struggle with interpersonal relationships and authority, which makes finding someone to have an honest relationship of accountability with daunting. It’s not uncommon for alcoholics to try to go it alone for long periods of time without ever reading the AA Big Book or working the steps before finally breaking down and finding a sponsor. The most common reason alcoholics eventually enter a relationship with a sponsor and work the steps is that they recognize that their drinking and destructive patterns will destroy everything in their lives if they don’t overcome it. Desperation to escape slow death at their own hands drives them to reach out to another recovering alcoholic to get help in achieving lasting sobriety. Working with someone else, who has overcome similar struggles, works. They understand each other based on shared experience and are able to point each other toward spiritual growth, which is the most important component of the AA approach to recovery.

As a pastor, I’ve long been aware of the Biblical roots of the AA approach to recovery. The alcoholic acknowledges that they can no longer control their lives, turn control of their lives over to God (who is more powerful and able to control their lives), they then confess their past moral failings and seek to make amends with those they’ve wronged. This is essentially the Biblical path to salvation: acknowledge that we are sinners, turn our lives over to Jesus, confess our sins after a fearless moral inventory, then do our best to make it right, while continually striving to overcome our sins. Sponsorship is discipleship. Discipleship is when a believer finds someone- a more mature believer to help them train, grow spiritually, and overcome sin in their efforts to be imitate Jesus. The unfortunate reality is that despite the fact that AA sponsorship is an imitation of Christian discipleship, it is far more common in AA groups that discipleship is in churches. Christians just don’t look for relationships of accountability and spiritual training in an effort to grow in Christ and overcome sin. The desire to overcome moral failings isn’t present in churches in the same way that it is present in AA. This is despite the fact that discipleship is the basic method of spiritual growth and training presented in the Bible. It is how Jesus grew believers and how the church grew disciples for centuries. 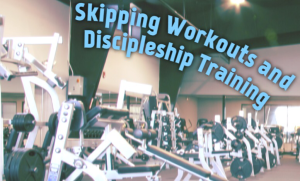 I’d suggest that the reason for the lack of discipleship in the modern western church is simple: we aren’t overly concerned with overcoming sin, growing in holiness, or imitating Christ. It’s important to enough to many believers that they might read a few books a year and attend church to listen to sermons, but this is often seen as “good enough.” Serious training to grow spiritually just isn’t often yearned after amongst believers. This is the same reason that there are around 4.4 Bibles for every household in the U.S., but only around 26% of the folks who own Bibles and identify them as important, read them. The folks working the steps in Alcoholics Anonymous see their addiction as a death sentence, so they find folks to disciple them in their spiritual growth as a means of escape. It is far too common for Christians to see overcoming their sins as an optional add-on to the faith or something they ought to do in the same sense as they ought to floss and lose weight. They do not see sin as a road to death or as utterly offensive to God. This general disinterest with overcoming sin is reflected in the literature the church consumes en masse, which tends to focus on how to be happier or more wealthy. Books dealing with imitating Jesus and obeying his commands are far less common and seldom approach the Christian best sellers list. It is often the case that when we preach/write about sin, it is focused on “wicked” groups outside of the body of Christ, rather than on our own failings. The church is content to point to the sawdust in the eyes of others, while ignoring the log obscuring our vision. We are pleased with Jesus as Savior, but uninterested in Him as Lord. Until following Jesus becomes the burning desire and priority in our lives, the church will continue to neglect discipleship. We must learn to detest our own sins and see overcoming them as escaping from death.

11 thoughts on “Alcoholics Anonymous and Discipleship”