Why They Can’t Stop: How Addiction Works

It’s hard to watch a loved one self destruct, to watch them repeatedly engage in behaviors that are clearly destroying them. Addiction is perplexing to watch from the outside because the addict time and again acts in ways that are obviously destructive to everyone else who is watching, but for some reason the addict just won’t stop. It can be particularly difficult to understand why they are unable to overcome the problem behavior because tremendous pain and a sense of betrayal are often inflicted when a loved one doesn’t stop getting drunk or high. That pain makes dealing with the problem even more difficult because it tends to make careful consideration difficult. It’s hard to think through a situation that you just want to be over because it is destroying the family, because, as an addict, they cannot stop on their own power. It seems obvious that the addict just needs to stop, but the situation is seldom as simple as that. One of the first steps to coming to grips with the situation is understanding the mechanism of addiction and why the addict engages in self-destructive behavior.
In the early 20th century, Russian scientist Ivan Pavlov’s famous experiment demonstrated the principle of classical conditioning. He did this by ringing a bell every time he fed a group of dogs. The dogs would salivate in response to the bell as they anticipated their meal. After thoroughly establishing the pattern, Pavlov began to ring the bell without providing food. The dogs salivated any 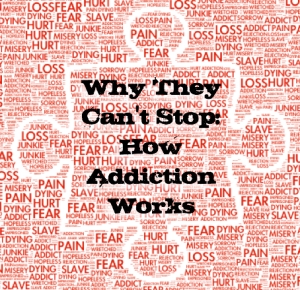 way, which demonstrates that their brains learned to associate the ringing of bells with eating even when there was no food present. Human brains have the same tendency. We learn to associate stimuli with certain feelings or having needs met. As the behavior is learned, they develop ingrained patterns, which become become compulsive. Understanding classical conditioning is an important first step to grasping how addiction works in human beings.
A person doesn’t become an addict by simply gambling too much or getting drunk frequently. Addiction takes place when the stimulus response mechanism in the brain gets out of control and begins to dominate the addict’s life. This often happens to people who lack healthy coping skills. Because they don’t have the ability to deal with stressful situations, they turn to escapes as a way of dealing with stress. Perhaps they have an unpleasant home life, which they aren’t prepared to cope with properly. They do not want to feel bad, but don’t know how to feel better through healthy means. Instead, they turn to alcohol, drugs, pornography, or some other means of escaping the situation. As time goes on, their brains begin to connect unpleasant situations with intoxication and feeling better. Every time something bad happens, they “use” (engage in addiction). As the pattern becomes increasingly ingrained, the individual becomes like Pavlov’s dogs. The bell rings (unpleasant situation happens) and the dog salivates (they respond by using in order to feel better). This pattern of stimulus response reaches the point of being compulsive as the addict gets deeper into their addiction. They literally lose control and cannot restrain their behavior. I have spoken to many addicts who genuinely want t 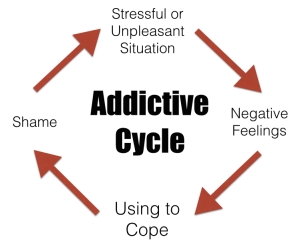 o quit, but when they get into certain situations their stimulus-response takes over and they become like passengers in their own bodies, watching passively as they act out their learned behavior. This is because the mechanism of addiction happens in the “old brain”, where things like fight or flight take place. This is the portion of the brain that takes over when thought isn’t the best response to a situation, like with fight or flight responses. It has the ability to take over the body and force the person to behave in predetermined ways. This is the same sort of thing that soldiers train to achieve. When combat happens, thinking turns off and the training kicks in. Addicts are similar, except that their training has been unhealthy and is now destructive.
What makes this addictive pattern really problematic is that as the addict avoids dealing with negative experiences, their brains store up all of the garbage they haven’t processed through. Whenever they sober up, the old feelings begin to find their way back to the front of their feelings/thinking. This makes the addict miserable, so they respond like Pavlov’s dog responds to the ringing bell, by getting intoxicated. Addicts that have advanced in their sickness,are often miserable all the time. Withdrawal also perpetuates the situation. When the body becomes dependent on a chemical, detoxification can be unpleasant, which prompts the stimulus-response cycle to kick in. What’s worse is that even if they begin to deal with their pain and get healthy, the portion of the brain that looks for the enjoyment of intoxication begins to manufacture misery in order to get back to intoxication. This happens in the form of inexplicable depression or anxiety, which is often an overreaction to really minor issues.
Another major component of addiction that makes recovery difficult involves thinking. As an addiction becomes ingrained, the addict’s thinking patterns develop mechanisms to protect the addictive behavior. The most prominent of these thinking tendencies is denial. Denial is when an individual cannot see how bad things are getting. An addict in denial can lose major relationships, have trouble with the law, become physically ill, and never blame it on their using. Most often, problems are either blamed on others or minimized so they’re perceived as not a big deal. Otherwise, problems are just ignored or worked around. An individual in denial cannot recognize the seriousness of their situation, because denial is a mental block preventing them from seeing how bad things are. It exists to keep the addict using. There are other thinking patterns that protect the addiction, but denial is by far the most serious and the most difficult to overcome. An addict in denial can have their whole life in flames and not be able to see that it is caused by their using. It is what allows an addict to destroy themselves without seeking help.
Diagnosing addiction requires the presence of three or more of the following criteria:

One thought on “Why They Can’t Stop: How Addiction Works”