While reading an article on masculine identity recently, I was treated to a fascinating comparison of two presidents: Theadore Roosevelt and Calvin Coolidge. President Theadore Roosevelt was a genuine cowboy. He was a Rough Rider that charged up San Juan Hill and a rancher in the Dakotas. Through and through, he embodied a sort of genuine masculinity in everything from his hobbies, relationships, parenting style, intellectual pursuits, and approach to leadership. He lived during a time when the nation was wild and untamed, and the masculine ideal in western civilization was also still largely wild and untamed. 3 decades after Teddy’s years in office, Calvin Coolidge was president during a time when the culture yearned for a return to the masculinity of yesteryear, which led to a nostalgic revival of cowboys and western lore. The problem was that it wasn’t real. Attached is a picture of Teddy the cowboy and Calvin the cowboy. One of these things is not like the other. The image of masculinity is not actual manliness. Regardless of how well-dressed Calvin was, he wasn’t a cowboy. Similar phenomena can be seen today as men try to look the part, talk the part, and act the part – without ever actually fitting the part. The ideal of manliness has grown indistinct and young men carry with them a sort of insecurity about their identity as men. This is the crisis of modern man. 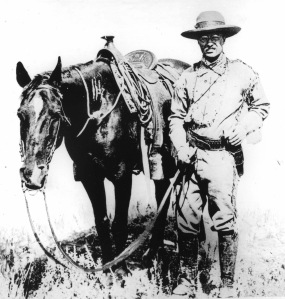 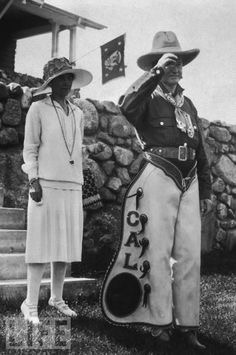 The Bible offers a clear picture of what God intended men to look, act, and be like. Paul tells us that Jesus is the full stature of mature masculinity. He was selfless, quick to action, principled, wise, a servant, loving, and courageous. In Christ, men are given an objective to aim for. The biggest problem we encounter with this definition is that it’s too big. I recently read a series of articles on how the ideal women of Proverbs 31 is terrible and demoralizing because it is perfection beyond attaining, sorta like trying to match the airbrushed beauty of a Cosmo cover girl. The same can be true for men. We are called to aspire to be like the son of God, the perfect man. The task seems almost too great, like attempting to swallow the sea in one gulp. However, we are given a few things that help us in that process. First, in Christ’s atoning sacrifice, we can find new life, freely given, that makes us new. We are new men if we are in Christ. Beyond being new creations, we are given the Holy Spirit who reshapes us. We are in the constant process of being remade as we follow Jesus. God helps us become new. A final major gift that God gives us in the process of becoming men like Jesus is in His word. Jesus not only offers us his perfect example, he also gives us his teachings through the scriptures. God’s word gives us simple, easy teachings and directions. I don’t care for reading the instructions when taking on new things, but this is worth the effort.

The first simple list I think is worth considering as a man pursuing a life like Jesus’ is found at the end of Paul’s letter to the church in Corinth. Paul spends most of the letter answering questions that he had received in a letter from the church. He ends the letter with a set of instructions on various issues. Sandwiched between two paragraphs regarding mutual friends is 2 verses of instruction:

This short list reflects the basic task of Christian men in the basic work of being men like Jesus. Though the list is short, it takes place at the end of a long letter and is a reflection of the larger content of the letter. In the coming days, I’ll unpack each of these simple directions:


This is by no means the only set of instructions given in the scriptures. However, it is a good place to start because it is all encompassing.

5 thoughts on “Masculinity That’s More Than Just An Image”